Before we dropped off the chairs, we walked around the Arboretum and I was struck by this plant called the Robb's Wood Spurge 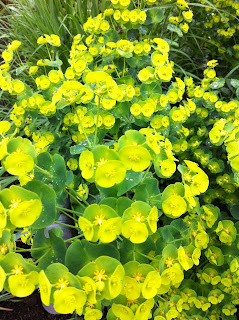 Later that night, Christel and I went to see the Van Gogh exhibition at the Philadelphia Museum of Art - this was a painting that I had never seen before - titled Dandelions.  It was so vivid that this image barely does it justice.  But, I was struck by the similarities that drew me to both.  cool. 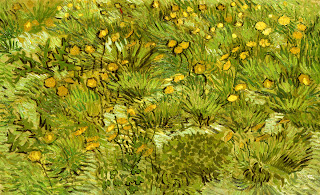 Katy Abbott
As a child and young adult I never considered myself an artist. Then I discovered I could work with my hands to create glass beads. The ability to melt glass in an extreme flame, wind it around a steel mandrel, and then shape it became an instant passion for me. There are many people who have said “I would love to learn how to do that”. But, either the idea of working in a 3000 degree flame or the cost of materials and supplies becomes a barrier. That is why when I found Zentangle® I knew I wanted to become a Certified Zentangle Teacher (CZT). The supplies are minimal – a paper tile, pen, and pencil. You can create one anywhere – in bed, on a train, sitting at your desk. Zentangle is a way of creating beautiful small art works using repetitive patterns. I attended a three day training with creators of Zentangle and am now able to teach anyone who can hold a pen this relaxing and rewarding artform. I have come to realize that I need a creative outlet as much as I need food and water. It keeps me grounded and thankful for all that I have. Stay in the moment – learn how to Zentangle.

I am the Diva Challenges